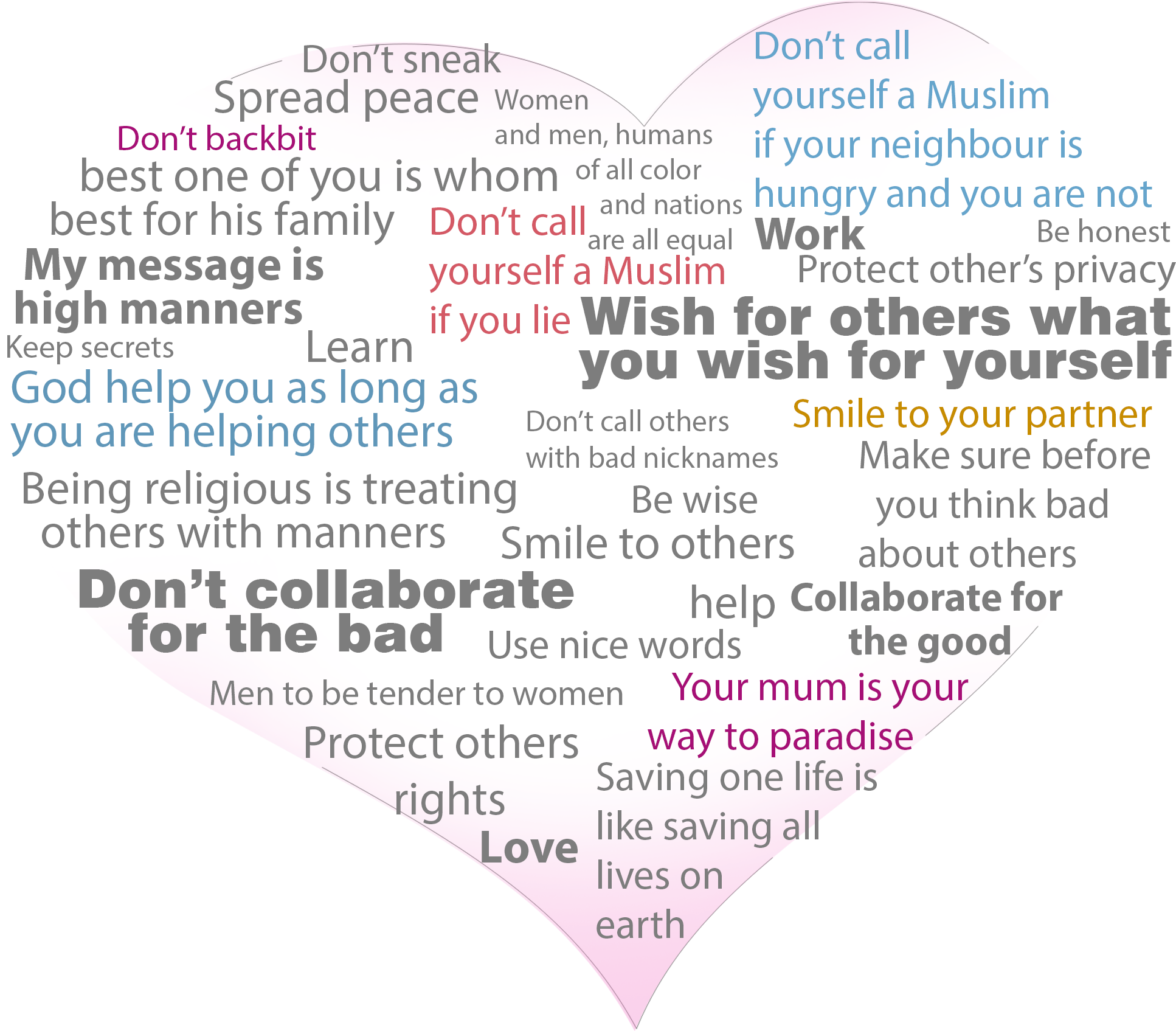 Parents satisfaction have huge inormous importance when it come to God satisfation. Muslim is asked to proiritize her/his perant needs over hers/his ones, and serve them humbly all their lives.

Collaborating with your partner to build a stable family that contribute positively to the society is what muslim familly buit for. But problems happen with muslim couples like any couples in the world, because, because they don’t follow the rules, like other couples in another culture or country don’t follow the rules of that country. It does not mean diffinetently there is a problem in rules.

Neighbor has a special place in Islam, a Muslim is asked strictly to be very good to his neighboe and be extremely carful about his privacy, comfort and not causing any kind of harm.

Treating Muslims and Non-Muslims equally, weather they are women or men, white or black, rich or poor, educated or ignorant. Humans are precious creatures. Honoring these amazing creatures show respect to the creator, God.

Never backbit, gossib never feel you are better than other Muslims or Non-Muslims.

Keep learning, respect your teacher, and teach someone every word you learn

If you have one burgeon hand, and it happens to be the end of the world, ..Plant it.

Give money, give food, share your knoledge with other. no matter who they are.

To respect others and their contributions, whatever small it is. And to see your own contribution smaller that other’s.

Why behaviour of majority of muslims does not seem to comply with what, in fact a very good above mentioned instructions, of Islam? Where does the gab come from?

The answer her is “political”, I can’t put it in another context:

First of all I will use Vichy as an example, so i will explain what it is for people who don’t know: I guess most of you know Vichy, the “French” government that was french! but worked for Hitler for four years and for the best of the Nazis. This government was sending the french youngsters to work in the German arm factories like slaves and chasing french resistance of the French-German alliance. Vichy did more criminal acts in France! For the sake of Germany of Hitler.

Since Sykes–Picot Agreement, the secret treaty of 1915, the two poles of occupation at that time Britain and France started to divide the Middle East by invented un-natural separating borders and implant their “Vichy.s” Governments! One very bad good-example of those is the …x… family, who is dectatorshiping …x…country for 70 years now!! All Arab countries suffered and are still suffering the same situation.

This “Vichy” governments creation in the Arab region is still undergoing until now, look at Haftar the famous war criminal, who is bombing Libya supported by some European leaders and the US to destroy the revolution there in the name of fighting ISIS!! as usual.

One task for Arab “Vichy.s” was to destroy the Islamic education, putting scholars in prisons, terroriaing people, stealing resources, …etc.

Mentioning this brief above.. Please don’t expect from people with almost 80 years of seeking surviving from attacks against their normal life, their history and religion, suffering as well of global Media attacks and lies, to be able now to represent a good image about themselves and Islam. Forget about them and their behaviour and dig to know about Islam.

The First Day of Islam